Lipids are a diverse group of compounds that are united by a common feature. Lipids are hydrophobic (“water-fearing”), or insoluble in water. Lipids perform many different functions in a cell. Cells store energy for long-term use in the form of lipids called fats. Lipids also provide insulation from the environment for plants and animals. For example, they help keep aquatic birds and mammals dry because of their water-repelling nature. Lipids are also the building blocks of many hormones and are an important constituent of the plasma membrane. Lipids include fats, oils, waxes, phospholipids, and steroids. 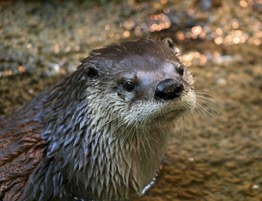 A fat molecule consists of two main components—glycerol and fatty acids. Glycerol is an organic compound (an alcohol) that contains three carbons, five hydrogens, and three hydroxyl (OH) groups (Figure 1). Fatty acids have a long chain of hydrocarbons to which a carboxyl group is attached, hence the name “fatty acid.” The number of carbons in the fatty acid may range from 4 to 36; most common are those containing 12–18 carbons. In a fat molecule, the fatty acids are attached to each of the three carbons of the glycerol molecule with a covalent bond. This molecule is called a triglyceride.

Wax covers the feathers of some aquatic birds and the leaf surfaces of some plants. Because of the hydrophobic nature of waxes, they prevent water from sticking on the surface (Figure 2). Waxes are made up of long fatty acid chains covalently bonded to long-chain alcohols.

Phospholipids are major constituents of the plasma membrane, the outermost layer of animal cells. Like fats, they are composed of fatty acid chains covalently bonded to a glycerol or sphingosine backbone. Instead of three fatty acids attached as in triglycerides, however, there are two fatty acids forming diacylglycerol, and the third carbon of the glycerol backbone is occupied by a modified phosphate group (Figure 3). Phosphatidylcholine and phosphatidylserine are two important phospholipids that are found in plasma membranes.

Phospholipids are responsible for the dynamic nature of the plasma membrane. If a drop of phospholipids is placed in water, it spontaneously forms a structure known as a micelle, where the hydrophilic phosphate heads face the outside and the fatty acids face the interior of this structure (Figure 5).

Unlike the phospholipids and fats discussed earlier, steroids have a fused ring structure. Although they do not resemble the other lipids, they are grouped with them because they are also hydrophobic and insoluble in water. All steroids have four linked carbon rings and several of them, like cholesterol, have a short tail (Figure 6). Many steroids also have the –OH functional group, which puts them in the alcohol classification (sterols). Remember that each line in these diagrams of chemical structures represents a covalent bond. The points where the lines connect to each other show the location of carbon atoms – these carbon atoms are not labeled, but their existence is implied in the chemical structure.

Cholesterol is the most common steroid. Cholesterol is mainly synthesized in the liver and is the precursor to many steroid hormones such as testosterone and estradiol, which are secreted by the gonads and endocrine glands. It is also the precursor to Vitamin D. Cholesterol is also the precursor of bile salts, which help in the emulsification of fats and their subsequent absorption by cells. Although cholesterol is often spoken of in negative terms by lay people, it is necessary for proper functioning of the body. It is a component of the plasma membrane of animal cells and is found within the phospholipid bilayer. Being the outermost structure in animal cells, the plasma membrane is responsible for the transport of materials and cellular recognition and it is involved in cell-to-cell communication.

How does lipid structure relate to function?

Fats (triglycerides) are made up of three fatty acid hydrocarbon chains connected to a glycerol. Fatty acid chains contain large numbers of carbon-carbon and carbon-hydrogen bonds – they are typically made up of between 4 and 28 carbons connected together in a chain. Just like the carbon-carbon and carbon-hydrogen bonds in glucose allow that molecule to store energy, the bonds in fatty acids allow triglycerides to store energy. In fact, triglycerides can store much more energy than carbohydrates because they contain so many more bonds! This is why fats contain more calories (a measure of energy) than sugars do.

Waxes function to provide a waterproof coating on a surface. Because they are hydrophobic, they can form a coating that repels water.

The structure of phospholipids is very important to their function. Because they are amphipathic (have a hydrophobic and a hydrophilic portion), they self-assemble into structures where the hydrophobic tails are hidden away from the watery environment. This gives the cell membrane a structure that prevents many molecules from moving through it.

Cholesterol is also amphipathic. It can insert into cell membranes in a manner similar to phospholipids. The presence of cholesterol within a membrane prevents the phospholipid tails from packing together tightly. This allows the membrane to remain fluid at lower temperatures.